Perhaps the most significant change in my life over the past year or so has been joining a startup that has transitioned to operating as a fully distributed company. While we still maintain an HQ in Brooklyn, it’s all but vestigial at this point. As a result I’ve been working from home a lot. But this also means that I’ve been allowed to travel a great deal, since all I need to put in a day’s work is a wifi connection and a power outlet. In fact, I calculated that by this August I will have spent over 60% of the time since moving into my new apartment last November, not in Brooklyn.

Some of this travel has been for work (team off-sites to Mexico and San Diego–I’m definitely not complaining), while other trips have been for less-than-happy family reasons, including a funeral and several hospital visits.

But the bulk of my travel has been simply because I can. Summarized in brief:

It probably goes without saying that the freedom and flexibility I’ve been afforded over the past 6 months or so have been incredible. But I’ve been increasingly aware of the very real downsides.

Wait, what could possible be bad?

Well, the first con that’s been the most consistent (though also the most minor) is the lack of a good workstation. Sure, a laptop and a table is all you need, right? Well maybe. But I’ve been ending most days pretty sore, with stiff hips and numb wrists. I miss my standing desk, and the makeshift ones are pretty hit and miss. Some of my more desperate attempts are shown below: 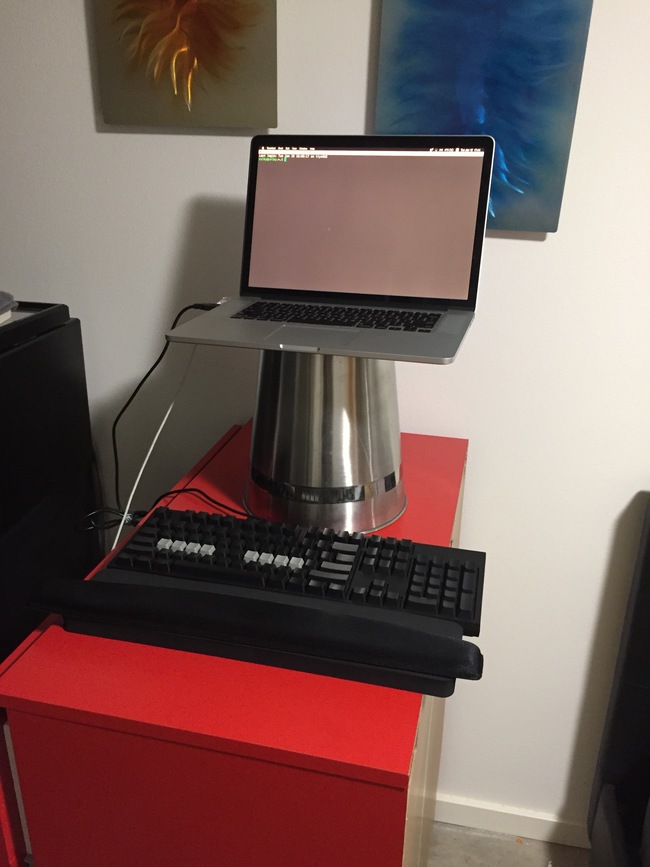 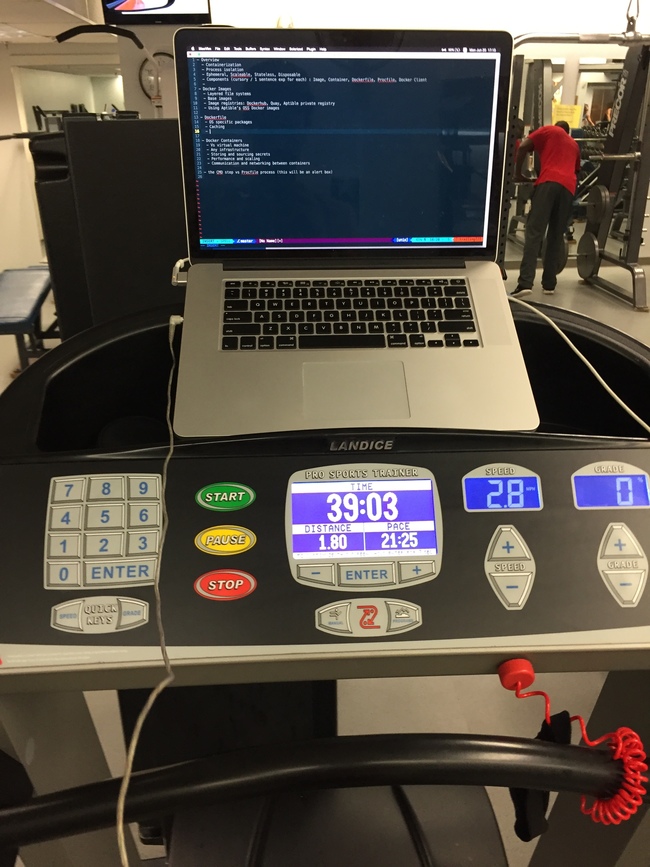 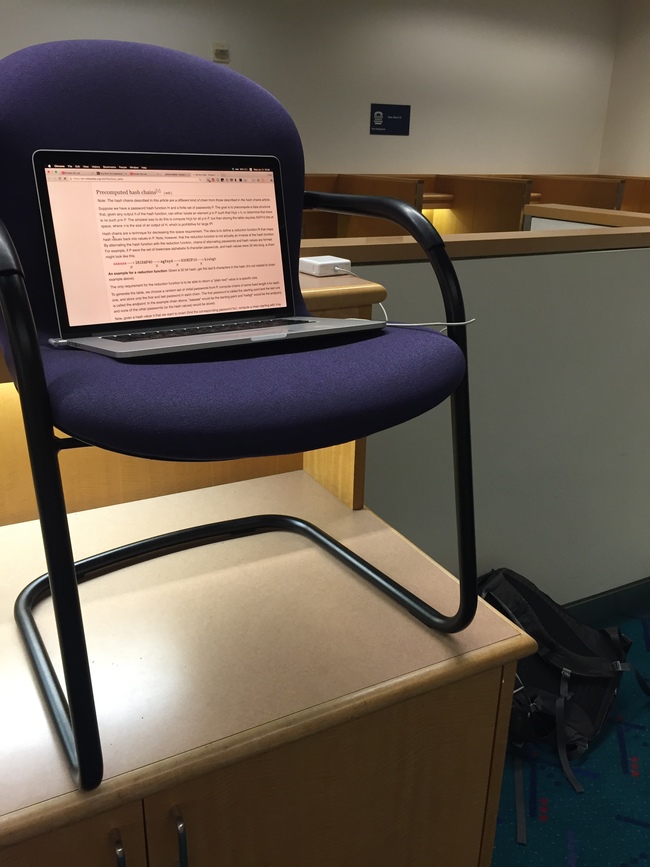 This is getting ridiculous 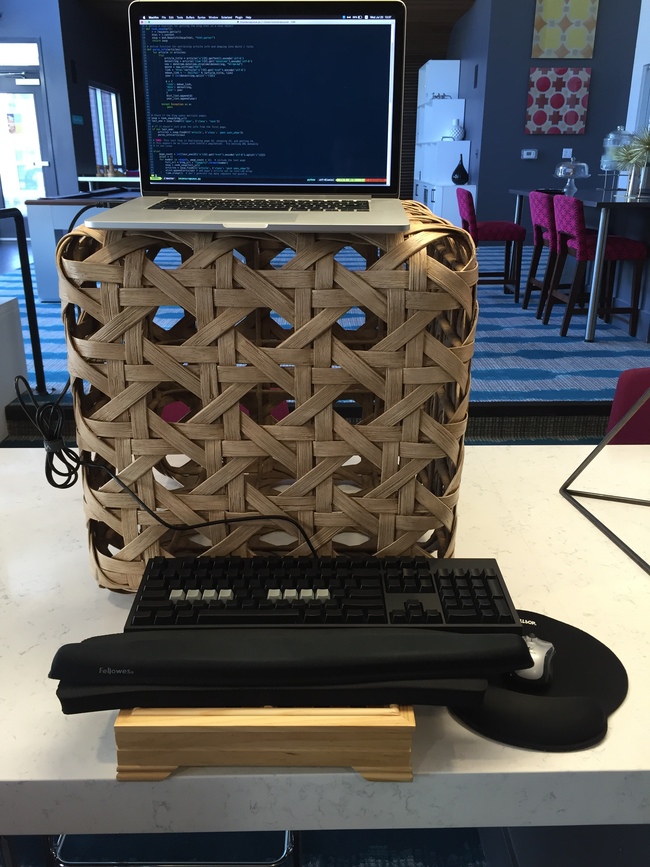 Secondly, figuring out a new town adds cognitive load, and getting work done plus attending to other priorities (e.g. trying to run every day, or working on learning to program) is made much more challenging when you need to determine where to stay, where to go for the day’s work, where to get food and coffee (this last being the most important of all), and then figuring out how to get there. You can’t beat the public transportation in NYC, and in other places it can be total garbage. So you end up either walking or taking a cab.

These obligations and minor hassles can dilute a travel experience, but they’ve also meant that I haven’t been fully present. When I’ve traveled in the past I had no agenda; the requirements of a day’s [remote] work plus the mentally addling nature of triaging client requests didn’t exist to leave me with brain soup by 6pm. This meant that I could roll up to a café and just start talking to people. I was much more outgoing. In fact these social adventures were one of my favorite things about traveling alone, and the approach stayed with me when I moved to NYC. Whether it was a couple having a meal outside a hip spot in the village or a rando on the subway platform, I would probably talk to them. (The latter being how I met my first post-college girlfriend.) The ease with which I met new people has not been part of my life lately.

The last drawback has been that I lack community. I don’t have a sense of belonging. It’s not easy to always be on the move with no sense of home. And I think this point extends to the growing trend of distributed teams more generally. For those who draw community and even family from their workplace (as I did in my last gig), working remotely can be deeply isolating, and going full days having hardly spoken to a single person is a really weird experience. I can actually feel that my social ‘muscles’ have atrophied slightly; I’ve always been quirky, but I think I may be becoming straight-up awkward (there’s at least one person now muttering “becoming?…”).

To reiterate, it’s an incredible privilege to have lived with such latitude over these months, especially given family matters. Being able to work a day and then spend the evening watching your a college acquaintance qualify for the Olympics, or simply taking lunch to join a brother during physical therapy, is something I wouldn’t readily trade. But some days when you pack up your laptop and head out into the street to watch the setting sun’s warm glow fade from the distant Denver mountainscape, it’s easy to wish you had a few people to see it with you.

A Bitter Divorce: Moving from Vim to Sublime

Vim and I are…slowly…splitting up. Update: as of July 2016, we got back together. For now… Note: This is a post about one of the nerdiest topics imaginable. If you want to hear one man’s ‘there and back again’ about a text editor, read... Continue →