Further updates about Justin’s road to recovery can now be found at a dedicated blog, here.

This past Wednesday, Justin was successfully transferred from Renown Hospital in Reno, to Craig Rehab in Englewood, CO (right outside of Denver). The transfer and flight went as well as we could have hoped for - there were clear blue skies with no turbulence, and Randi, Justin and I were accompanied by a wonderful team of medical transport nurses and pilots. 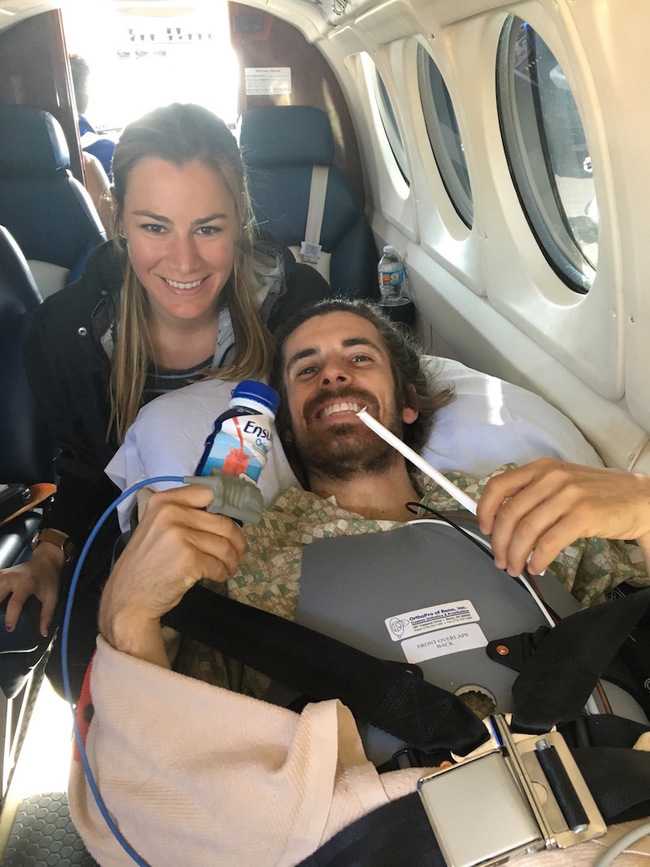 Upon our arrival to Craig, we were greeted by many of the nurses on Justin’s doctor’s team (each doctor has a team of nurses that stay with the patient during the duration of their stay), and immediately felt uplifted by their energy and positivity. The quality of care here has been incredibly high caliber (they do specialize in this stuff after all :)), and our minds are at ease knowing that Justin is in good hands.

Wednesday and Thursday we spent our time getting settling in, and ready for rehab to start in full swing. In general, patients at Craig have an all day schedule, from 9am - 4pm, with a variety of physical, psychological and educational sessions. Their aim is to treat the patient holistically. They even have a recreational program where they take patients adaptive biking, to baseball games, and more. I think we all know how much Justin relishes being in the great outdoors, and we are so fortunate to have this program accessible to him.

On Friday, JP hit the ground running and had an occupational therapy class, a group fitness class (aka, he “pumped iron”) in the gym for an hour, and was able to ride the functional electrical stimulation bike (FES). The FES bike was the highlight of the week! Essentially, they attach electrodes to Justin’s legs and pump electricity through his muscles in order to stimulate movement. Watching his legs move, and his muscles work out, was pretty astounding and a bit emotional as well. 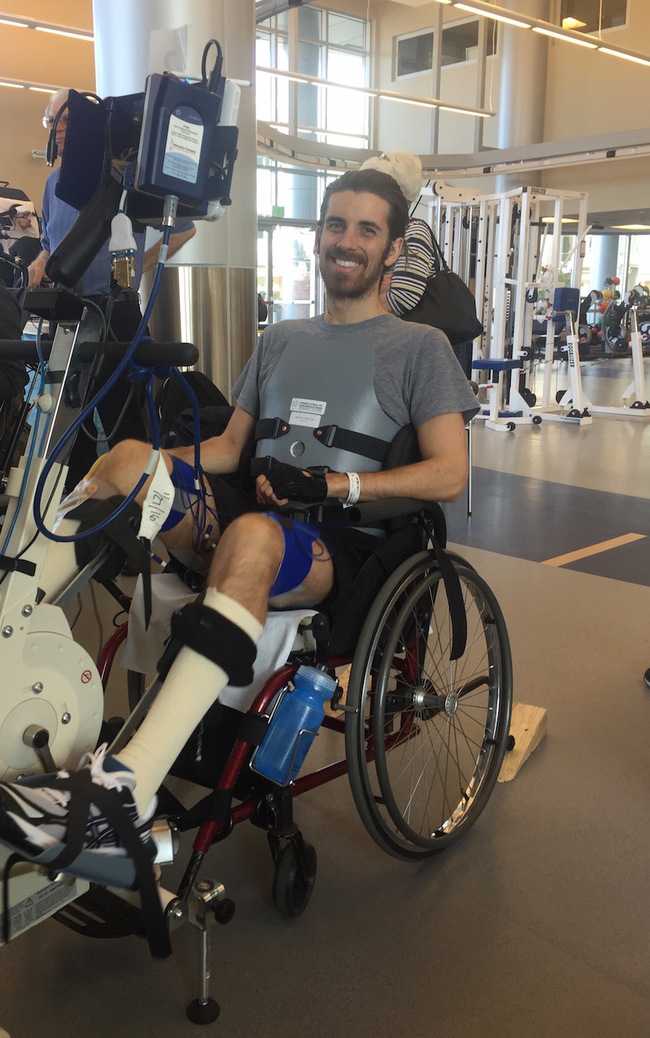 This weekend, we’ve had the lovely Michael and Sarah Maag visiting (Justin’s best friend and his wife), and are having a relaxing time before his first full week of rehab. We are more eager than ever to get started, and all of you cheering Justin on means the world to us.

Justin departs for Craig early on Wednesday. If you’d like to send anything to him, please wait a bit until we have a new shipping address to provide.

Meantime, here’s a picture of JP finally in the sun :) 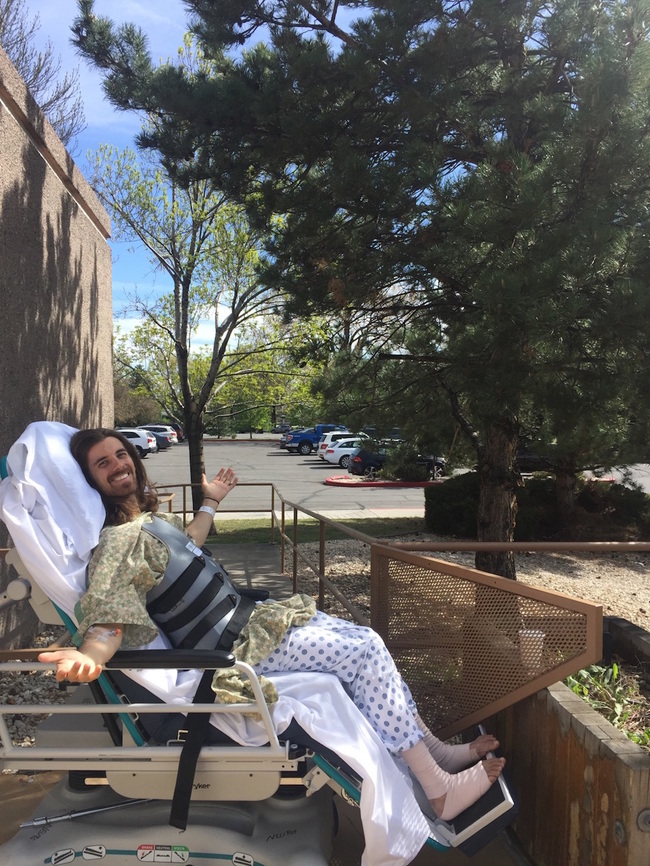 It’s been a handful of days since my last update, and I know JP has been in all of your thoughts and prayers. That said, I wanted to take the time to share what’s been going on here at Renown Hospital in Reno with all of you.

There are two major highlights:

These are two very big, and exciting, steps in his recovery :D.

The transition out of the ICU has proven a bit challenging. The patient to nurse ratio is much higher in the neuro ward than in the ICU, and we’ve found that the quality of care has degraded pretty significantly. [The seemingly widespread incompetence is staggering –CP]. Also, Justin has had regular fevers (104.5 today), which we’ve been monitoring closely.

Despite these hiccups, Justin has remained strong in both spirit and mind. We’ve seen significant improvements each and every day. He no longer has an IV (or any other tubes in him for that matter), and is showing improvement in physical therapy.

To give you an idea of his tenacity, upon putting on his chest brace for only the second time, Justin instructed the nurses to remove their hands from supporting him while he was sitting on the edge of the bed with his feet dangling over the floor. We were all a bit nervous, but knowing Justin, you know how this story is going to end. The nurses slowly removed their hands from his brace and, you guessed it, he sat upright and supported himself on his own!

Of course, this filled us with even more excitement and hope for his rehab journey.

We are planning to move to Craig early next week, and expect that Justin will be there in inpatient rehab for anywhere from 6 - 8+ weeks. Inpatient rehab will be followed by a period of outpatient rehab, and we cannot wait to get started. We’ve heard wonderful testaments about the strength and positivity of the Craig community, and I, for one, am excited to see Justin’s core qualities of athlete and coach flourish in the coming weeks.

Thank you all for your outpouring of love and support. We feel it. It brings us strength every day and means the world to us. More to come soon.

P.S. - Many of you have expressed interest in visiting Colorado. We’re so excited and would love to see you. Please coordinate with me before booking any flights etc… I think once we arrive and settle in, after a few days we’ll have a better sense of what life will look like. :)

Over the past day, Justin has been straight crushing it, and it’s been amazing to watch. 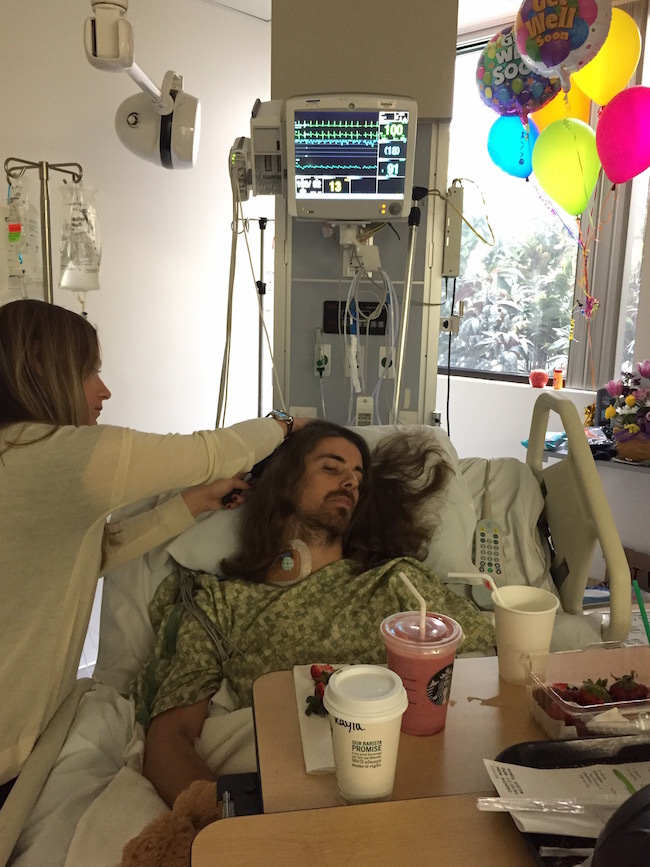 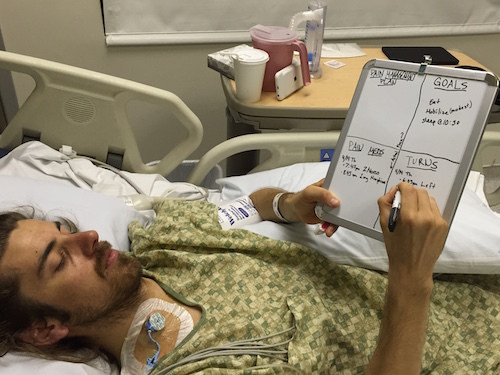 1. Before the chest tube was out, JP had a second go at wearing the back brace, aka breast plate, aka TLSO aka “Totally legit session outfit” (that last being obviously Justin’s interpretation). The few nurses on hand at the time weren’t stellar getting it strapped on, and the tube was causing quite a bit of pain. He ranked it 9/10, which is about as high as anything he’s endured.

He sat back and took a pause. His eyes closed, a vision came to him:

This was the crossroads. The rocky overhanging crag. Sucking up and getting past this was the threshold to recovery–to either that place of running naked, joyous, and free through wooded trails, or settling for mediocrity. The mentality must be set here.

He looked at this juncture, and kicked it in the nuts. Ramping up a couple doses of morphine (which he has been taking conservatively) he sat up. His legs came over the side of the bed. As a few nurses hovered, nervously steadying him, Justin insisted they let him go. “And for our next trick, I want you all to step out of the room.” ….

They didn’t go that far, but it would have been fine. JP gripped the side of the bed and just sat there with authority, a mere 4 days post-op.

2. Pretty much out of the blue, Justin was contacted by Roy Tuscany, the executive director and co-founder of Highfives Foundation. He had gotten the scoop from ski patrol right after the accident, and reached out via facebook and eventually via text. 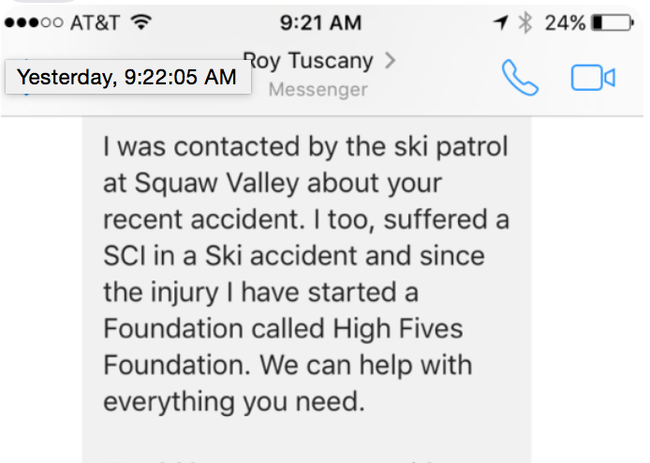 He came by today to meet Justin. It was a massively encouraging. He plans to call ahead to Craig and inform some of the folks he knows that JP is comin, and ready to kick ass and take names. He also offered to arrange to have a former Red Bull sponsored downhill mountain biker come by this weekend for a visit. The guy in question was also hit with SCI and made a pretty incredible recovery over the past few years.

Justin will hopefully be headed to Colorado next Tuesday. More updates to follow.

Last 24 hours have been busy and eventful. Some highlights:

In general, Justin has been a champ. So too has the staff and the team of family helping him out.

Thank you all for your love and support.

Changing of the guard: 2 of us just swapped sleeping in Justin’s room with him. Kayla has been an extraordinary partner and nurse! (she’s more than earned some sleep in a real bed at this point)

It’s much quieter in the new room, and JP has been able to sleep well. His voice is stronger, even at this hour, and his spirits are as high as ever. He sleepily makes a few old jokes and references and as he nods off I can hear him muttering that old Edwin Starr song “ … huh! absolutely …nothing…..zzzzz”

We called in the comfort calvary. We’ve moved Justin to a much quieter room where he’ll be able to sleep better. His day nurses have been awesome, so for that we’re very grateful.

We also gave him a good tooth brushin and he’s queued up to get a little bath. He’s much happier.

We’re focused on keeping Justin distracted. We’re making sure he’s taking water, being as comfortable as possible, and working on his breathing exercises. The latter has been challenging due to the auxiliary injuries. But he remains a champ. Tough as nails.

JP had surgery this afternoon to fuse his T4 and T5 vertebrae. The neurosurgeon said the surgery went very well. He was a very professional, and knowledgable doctor and kindly offered to come in on his day off to perform the surgery (it was originally scheduled for Monday, but coincidentally the surgeon has a son who is 30, also named Justin, and he really took to JP after meeting him). They were able to take a sonogram of his spinal cord, and as the MRIs indicated, it is severely damaged. But, it is not severed, which is great news.

More importantly, Justin was in incredibly good spirits after his surgery. He was even laughing and making jokes :). He’s a fighter, and so very strong. Our hope and spirits remain very high.

We expect he will be in Reno for at least 7 more days to recover (we are currently in the ICU), then he will be transferred to a rehab facility for a to be determined, and likely extended, period of time. We are still researching rehab facilities, but one of the best spinal rehab facilities in the country happens to be in Colorado just 5 minutes away from an AppNexus office :).

I will keep you all updated as things unfold. At this point we all deeply appreciate your kind words and support.

Please keep praying for him, and our whole family during this tough time.

A Bitter Divorce: Moving from Vim to Sublime

Vim and I are…slowly…splitting up. Update: as of July 2016, we got back together. For now… Note: This is a post about one of the nerdiest topics imaginable. If you want to hear one man’s ‘there and back again’ about a text editor, read... Continue →