Only a few days into 2016 and I think I’ve already bagged a highlight.

Devon and I headed out to Redwood Regional Park on a drizzly, grey afternoon. Funky jams blasted as our car wound up the fog laced Oakland/Berkeley hills, greening everyday with frequent rain. Devo is classic: Hours-old cup of Peet’s in one hand, and a diminishing bottle of Pellegrino in the other.

The mission of the day: Find a trail I hadn’t done in years, and get it all done before dark. This one takes you through miles of windy and heavily forested single track that overlooks an expanse of hills on one side. It eventually dumps you onto a fire trail that splits miles of cow pasture and comes to an overlook of the Caldecott tunnel. The entire run is between 6-8 miles depending on how you link it together, but by the turn-around it feels as if you’ve gone a very long way. 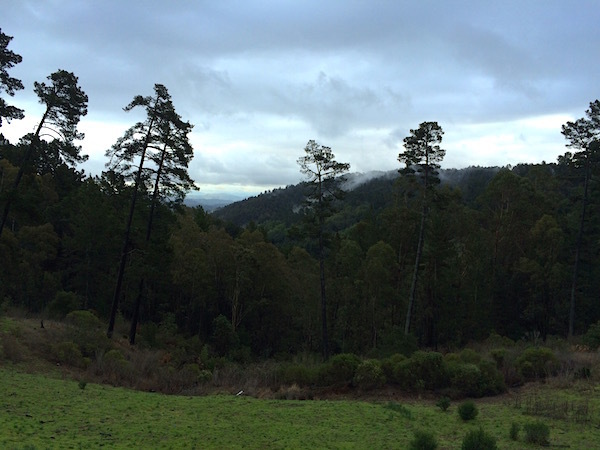 The run was perfect. The views were beautiful, the temperature was ideal–cool, overcast, with an occasional misting that threatened to turn to drizzle.

We were also very silly. 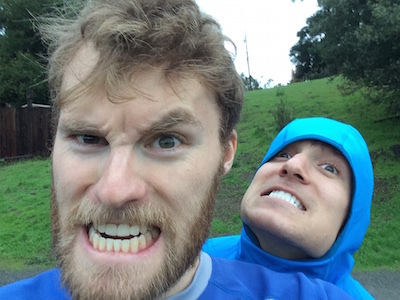 At one point we came to a clearing after deliberating between two trails. Atop a small hill there was a lone guy–the kind of guy who you probably picture when you picture a classic Berkeley/hippy-type. He had long hair, an open plaid shirt (despite it being a bit cold and damp), and he just exuded contentment as he peacefully danced to some funky jam, playing quietly on a small speaker he was balancing on his guitar case. The small joint he had dangling in his mouth probably helped. His backdrop was a real Edward Church painting–dramatic clouds with a circle punched through by a gorgeous sunbeam that lit up part of Oakland. It was a view of the bay you remember. Wish I had a photo…

We also tried to scale a little 20ft cliffside (instead of taking the maybe 20 meter trail that wrapped up the side of it) but the wet sandstone just crumbled away. A bad idea that we quickly abandoned.

Shortly thereafter he chased some cows, tearing ass down a hill and yelling hilarious nonsense. The slippery grass was impossible, and toward the bottom his feet flew out from under him.

We charged up another muddy bank and spent another 2 minutes laughing and falling everywhere.

It was a great evening.

By the end of the run it was dark, and we were covered in mud. My calves ached from battling buddy slopes.

We met up with some friends for dinner and a couple beers, and by the end of that my throat and stomach ached from laughing so hard.

Perhaps the most significant change in my life over the past year or so has been joining a startup that has transitioned to operating as a fully distributed company. While we still maintain an HQ in Brooklyn, it’s all but vestigial at... Continue →